Meanwhile, we have all been bombarded with posts and articles that are quick to expose the Just-in-Time and Lean approach to management as one of the major causes of the lack of medical supplies, so much needed in the battle against COVID-19. Well-respected journals and university professors alike have ignorantly equated Just-in-Time and Lean with low, even too little inventory; how naive. I have also written about this misunderstanding before: Resilient Just-in-Time: an oxymoron?. But why is it that Lean companies, and particularly Toyota, have been witnessed to withstand crises like these, as the best? And to recover as the fastest of all? And to come out of a crisis stronger than ever before? Remember that Toyota was born from a crisis, rose to stardom during the oil crisis, and has been growing stronger through the financial crisis and the earthquakes during the last decade. This is because Lean and JIT are so much more than the mere logistics that some appear to only see, as it is part and parcel of Toyota’s way to build financial resilience.

Beyond the supply chain: financial resilience

When I read most of the articles and posts that are putting the blame for some of the current supply chain problems on JIT, I cannot help but feel that the authors are still living in the 70s and 80s of the last century, when we found out there was “Little JIT” and “Big JIT”. During these years, we slowly learned that what we witnessed on the surface, i.e., kanban systems, low inventories, and fast and smooth material flow, was only a part of the story. This is why this initial understanding of Just-in-Time or JIT got the adjective “Little”, and the new and more comprehensive view of the system was named “Big JIT”. “Big JIT” ultimately evolved into what we now refer to as “Lean”, you might say.

But there is an aspect to Lean companies, and particularly Toyota, that is rarely discussed, and that is the financial resilience of Toyota. I would like to dwell upon this aspect of Toyota and compare it to some of its peers. Although I am very much aware that there is always a big risk in benchmarking. But still, bear with me, and make up your own thoughts.

Financial resilience, you could say, is the company’s (financial) ability to withstand events that severely impact their income and/or asset base. Just consider your own private financial situation. How much debt do you have compared to your income, for instance? How deep are your pockets, in terms of cash and savings, to overcome the drying up of revenue streams? And how much financial slack do you have in your budget?

There is an aspect to Toyota, that is rarely discussed, and that is its financial resilience.

You can, of course, translate this also to the company perspective. Let’s have a look at debt first. One of the first things to look at is how much debt a company is using in its financing structure or its debt as a percentage of its total assets (called debt ratio). Toyota’s debt in its 2019 annual report was 60% of its balance sheet total. Now, compare this to some of their peers, which are in the range of 70-87%. This means that Toyota is far less “leveraged” than their peers.

A related balance sheet ratio is the debt-to-equity ratio, which is a company’s total liabilities (debt) over its total shareholder equity. It is a leverage ratio and it measures the degree to which the assets of the business are financed by the debts and the shareholders’ equity of a business. Not unsurprisingly, Toyota’s debt-to-equity ratio is “only” 1.6, whereas those of its peers range from 2.1 (Renault-Nissan) to 6.8 in the case of Ford. 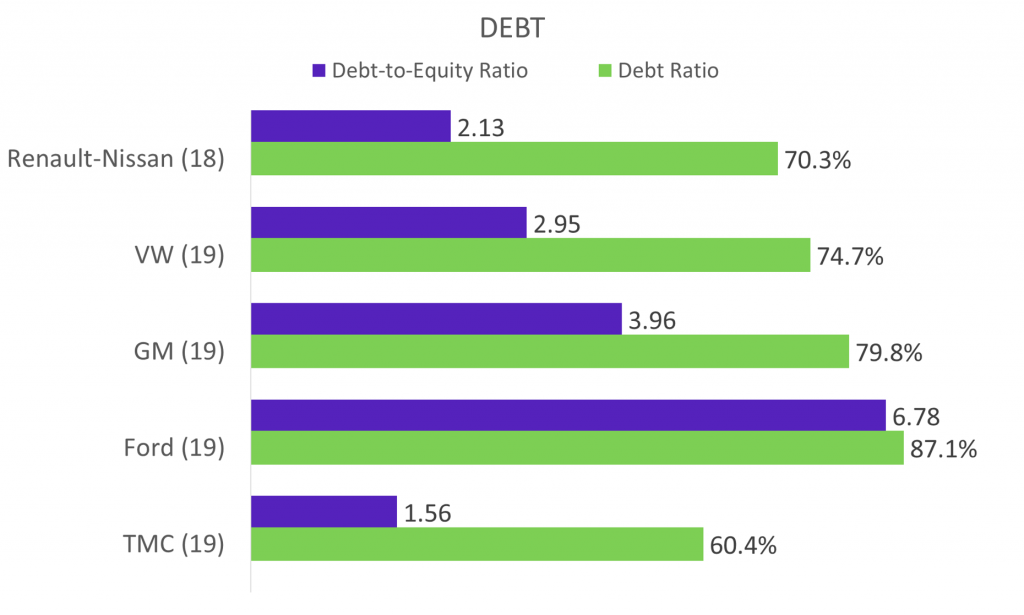 And no doubt Toyota has some deep pockets

Analogous to our own financial situation, another perspective on a company’s financial resilience is its ability to cover its cost based upon its short-term, or liquid, current assets like cash, receivables, and marketable securities. Let’s take these liquid current assets, and compare them to the average monthly, operational cost level. How many months of their average operational cost are covered by them?

As you can see in the chart below, Toyota is able to cover 5.1 months of average operational cost, compared to its peers that are between 2.0 and 3.9 months. Again, a sign that Toyota is, in fact, far more financially resilient than its peers.

Yet another way to look at financial resilience is to look at liquidity. For instance, the so-called quick ratio (a.k.a. acid-test ratio) measures a company’s ability to pay its current liabilities with its liquid current assets such as cash, marketable securities, and receivables. Toyota’s quick ratio is 0.65, compared to its peers, that are in the range of 0.24-0.45.

Now that we have looked at the financial buffers Toyota has in terms of (liquid) current assets compared to its peers, let’s turn again to the analogy of our personal savings account, that we could put to use if need be. On a corporate scale, the company’s (cumulative) retained earnings on the balance sheet could be corporate “savings”.

Retained or accumulated earnings is a component of shareholders’ equity which represents the cumulated, amount of net income left-over with the company after periodic distribution of dividends. Toyota’s accumulated retained earnings represent 42% of its total assets. Now compare this to its peers who are in the range of 8 to 26%. It means Toyota has financed its assets for more than 40% by their own profits, and that it relies far less on debt or capital injections to fund its operations. 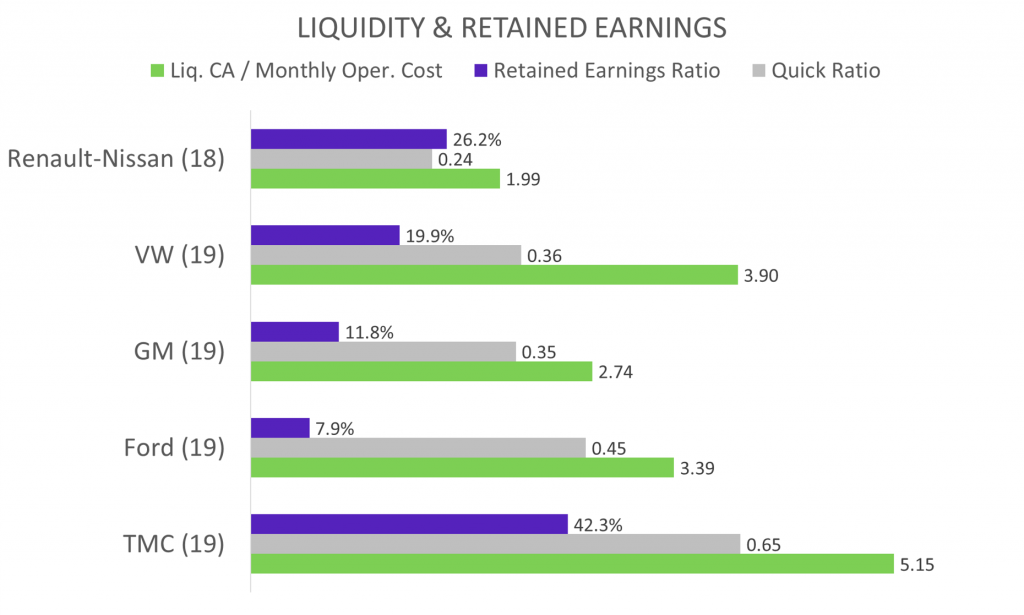 Of course, you can only get to these retained earnings ratio levels if you earn a good income, and you retain large parts of your income, and you do so on a yearly basis. Which brings us to the analogy of financial slack in the business. Coming back to your own personal situation, you could see this as your revenue over your cost. Or in more corporate terms: profitability of course. And again, Toyota is ahead of its peers with net income as a percentage of revenues of 6.2% and an operating margin of 8.2%. 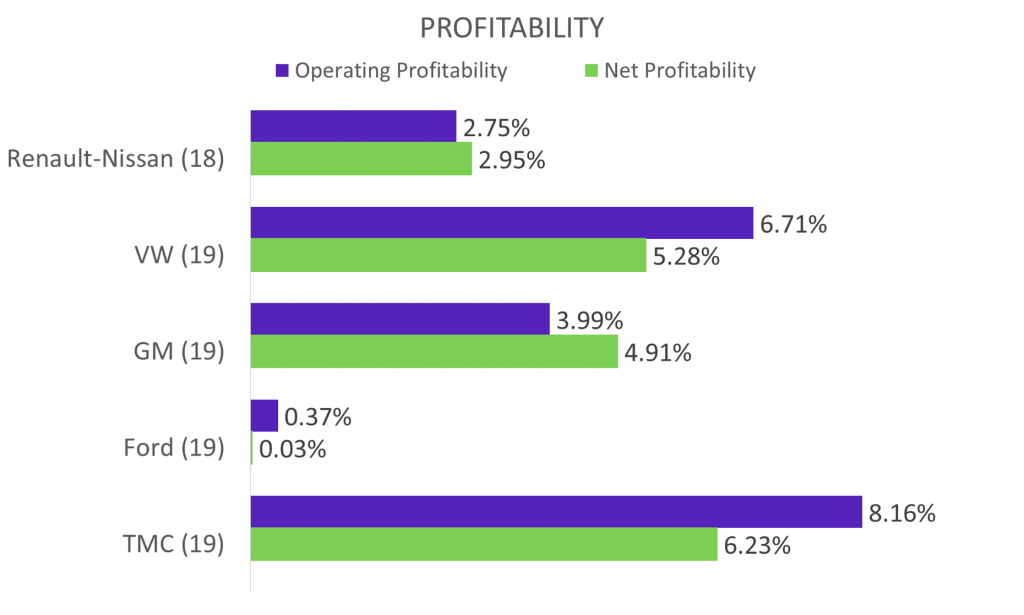 All in all, Toyota is far more financially resilient than its peers. It has more financial independence, more liquidity, and more “savings” than any of its peers; and not even just a little bit, but significantly!

To me, it demonstrates that there is so much more to Lean than meets the eye. It is a symptom of Liker’s first principle of the Toyota Way, namely “Base your management decisions on a long-term philosophy, even at the expense of short-term financial goals.” Making money is not the end, it is the means. And Toyota’s balance sheet and financial ratios show this.

All in all, Toyota is far more financially resilient than its peers.

Where do deep pockets come from?

In the end, as you can see, financial resilience comes from making consistent and decent profits on growing revenues and retaining large parts of it to fund and strengthen the business. In the end, therefore, it comes down to leadership with such a consistent long-term vision, satisfied customers, and last but not least, healthy margins. Cost reduction is not a dirty word. And you can read here why Lean definitely is about cost reduction.

Lean, and the Just-in-Time concept as a part of it, aims at satisfied clients at low costs. Just-in-time means only producing the parts and products that can be sold, when they can be sold. You do not buy, move, or produce, unless there is a need for it. The purpose of JIT is to maintain a well-attuned, timely correspondence to the market needs. But from a larger perspective, it should be clear that when moving towards the ideal of a perfect just-in-time system, many, many improvements will be necessary in all phases of production, and across your whole supply chain.

Just-in-Time is not the goal

Like money is not the end, but the means for a Lean business, in JIT, inventory is not the end, but the means to trigger improvement. In that sense, just-in-time in itself cannot even be seen as a goal. It is an ideal, part of a company’s “true north” (in Lean lingo), or a guide to constant improvement, as was already identified by Doc Hall in the early 80s of the last century. JIT eliminates waste and reduces costs. Shingo as well wrote that JIT should be seen as only an intermediate goal on the road to improvement. It should not be confused with the final objective. The only higher objective is to improve profits by relentlessly eliminating waste, he stated.

And even Ohno saw it as an extremely rational approach to eliminating waste and as the basic philosophy of the Toyota Production System. It was Toyota’s theme, and his personal theme as well. However, Ohno himself mentioned that kanban (as one of the means to materialize the JIT concept) in itself does not raise productivity, nor that it does anything to reduce inventory. Adopting a kanban system in itself will not do the trick, Shingo also wrote. But kanban unquestionably promotes improvement in both work and equipment, Ohno mentioned. Kanban are used to bring to light the various forms of waste and thereby facilitate their elimination.

This brings us to the last element of Toyota’s resilience: continual improvement. JIT is seen as a way to bring problems to the surface and trigger improvement. And when you always strive to work towards the ideal of JIT, you are constantly challenging yourself and your organization to find problems, and to eradicate them using methodical and rigorous problem-solving methods. You are not only constantly eliminating problems which ultimately contributes to the financial resilience of a Lean company, but you are also constantly developing your organization’s skill in dealing swiftly and effectively with problems. And this is another element that contributes to Toyota’s resilience, and its amazing capability until now to come out of any crisis, winning…

More than 100 flights canceled and delays of sometimes over 20 hours with consequences for over 76,000 travelers. That was the sad result of Vueling's planning policies...
Read More

This is the third and last post in a series of three about knowing whether you are on your way to perfect flow. The better your flow, the more profitable your business...
Read More

Leveling: why customers and suppliers don’t buy into it

When you have been working on improving flow across the value stream, I am sure you have come across a situation where customers seem to order infrequently and...
Read More

Why your Kanban system will probably fail

Using Quick Changeover to speed up your service

People, not working in manufacturing, often tell me they don’t think this Lean “stuff” is applicable to their service context. Particularly not when their service...
Read More

Demand-Driven Material Requirements Planning, or DDMRP in short, promises to be the first real innovation to MRP since the invention of MRP. Furthermore, in one of its...
Read More

Why ABC-analysis is inadequate for your supply chain

When asked to analyze demand, most probably turn to what is known as the ABC-analysis. ABC-analysis typically groups items in classes referred to as A, B, and C based...
Read More

Measuring delivery reliability: be aware of the pitfalls!

Delivery reliability; there hardly is a company that is not measuring this in one way or another. After all, we all want and need to be customer-oriented, right?...
Read More

And again, we have a crisis on our hands that raises questions about just-in-time or JIT. Currently, the measures to restrain the coronavirus have led to Chinese...
Read More