This is the third and last post in a series of three about knowing whether you are on your way to perfect flow. The better your flow, the more profitable your business will be and the more returns it will deliver. But how to know where you stand in terms of flow? And how to evaluate whether you progressed? This series of three post tries to develop two measures – flow velocity and flow smoothness – as the way to evaluate the level of and the progress towards flow. In this third post, I will focus on flow smoothness to complement the flow velocity measure discussed in the second post.

The need for a better measure of flow

In the first post of this series of three, I have described the state of ‘flow’ as a state in which products advance continuously, steadily, smoothly and effortlessly towards the state in which they actually provide value for the customer. I then asked myself the question of how to determine a certain level of flow and how to measure our progress towards better flow. A first, well-known measure of flow, called ‘flow rate’ (also referred to as ‘throughput rate’ or ‘running rate’), was investigated. But I concluded that flow rate would not be a good measure of flow. Flow is not about how many units can pass a certain point in the flow in a given period. Flow is about every single unit of product progressing continuously and steadily with the same speed. Therefore, we need another check item to be able to determine the level of flow that exists in a value stream.

In the second post, I then introduced the concept of ‘flow velocity’. Flow velocity was defined as the product’s advancement or progress towards completion per unit of time. Or more specifically, the elapsed clock time during which net processing or value-added (VA) work takes place, divided by the throughput time (the elapsed time from entry of a material into the production system under consideration until its current state, using the same calendar as in measuring product progress). Or in short: flow velocity = VA time / throughput time.
But even this measure did not seem to cover the full concept of flow. As I wrote, one can run in one small burst and then rest, or one can run in four smaller bursts and wait in between. Velocity is the same, but flow?

This raises the question of how to measure the smoothness and steadiness of the flow velocity, as an additional measure of flow. At this point, I, therefore, would like to introduce the check item of ‘flow smoothness’.

One can run in one small burst and rest, or in four smaller bursts and wait in between. Velocity is the same, but flow?

In characterizing flow, both producers would show the same velocity, i.e., 10%. Still, they produced their products in a different way which is not detectable through the concept of velocity. Now, which one of the two comes closer to the concept of flow, i.e., products that advance towards their completion and value-added use by a customer or consumer in an uninterrupted way and with a constant, unvarying speed?

At this point, let’s introduce the concept of ‘smoothness’. Commonly, smoothness is defined as evenness, levelness, or flatness. In our context, smoothness of flow can be defined as the variability in velocity across the total throughput time. Also in neuro-engineering, medicine focused on rehabilitation and even in robotics, movement smoothness is a quality related to the non-intermittency of a movement. Movement intermittency is typically observed as dips in a movement’s speed profile or even finite non-zero periods of zero speed (i.e. movement arrest) during an ongoing movement.

The smoothness of flow can be defined as the variability in velocity across the total throughput time.

To study movement smoothness, a segmentation is typically used. This is a form of windowing procedure to segment the long movement into meaningful components for which the velocity can be estimated individually. This also allows one to track the velocity over the course of movement, on a segment-by-segment basis. An important point to note is that the results of smoothness analysis strongly depend on this segmentation. That is, the movement components should be clearly identified as specific events of interest for the purpose of analysis. In any analysis, one must first choose the events of interest, which will guide the choice of segmentation parameters and the subsequent smoothness estimation.

In our context, as (a) we are trying to evaluate the smoothness of a process across multiple processing operations and (b) we want to make sure our segments are equally long or isochronal (analogous to a standard sampling interval), a practical approach could be to divide the overall process by the number of net operations in the process. When segmented like this, the product’s advancement and throughput time (and thus its velocity) would need to be exactly equal in each segment to be smooth. 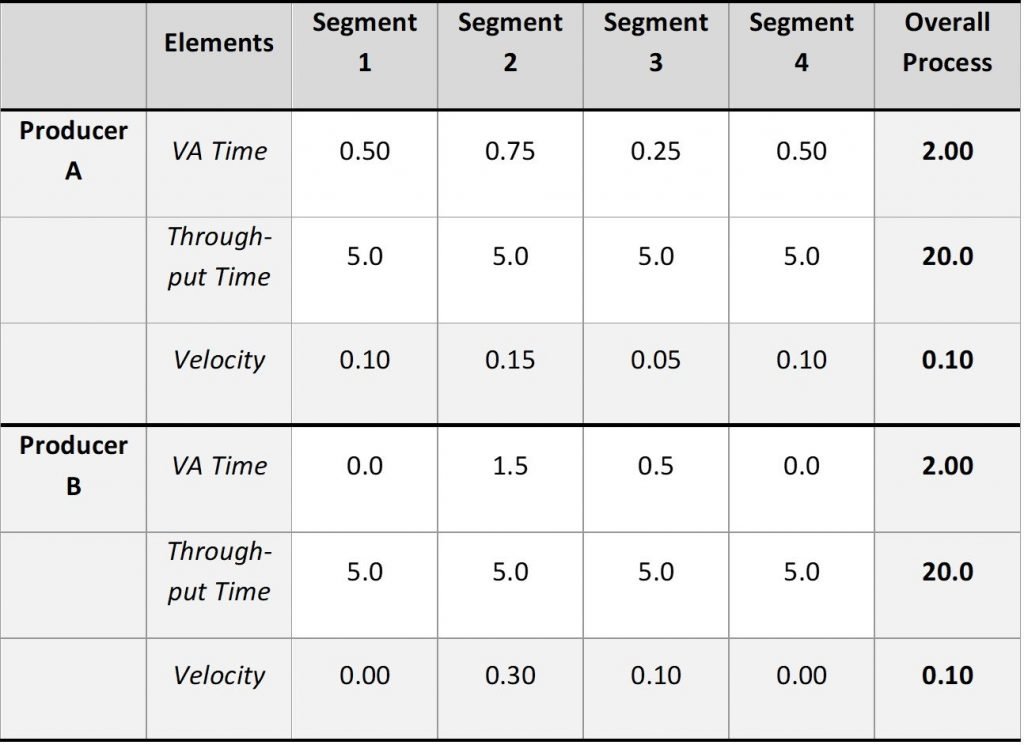 From the above, it may already be clear that the flow of Producer A, despite having exactly the same velocity as Producer B, is smoother than Producer B’s flow. Now the main and most useful ways of characterizing variability in a data set are range, standard deviation or the coefficient of variation (CoV or CV). In neuro-engineering, a measure called normalized mean speed (NMS) is also sometimes used, which is the mean velocity divided by the maximum velocity.

As the coefficient of variation or CoV is a useful number because the standard deviation of data must always be understood in the context of the mean of the data. And the CoV is a measure of spread that describes the amount of variability relative to this mean. This again enables you to compare it to other data sets that have a different mean and conclude something about its relative variability, in our case its smoothness. Normalized mean speed (NMS) shares this characteristic, but measures how far the mean is away from the maximum speed only.

The numbers for the most relevant measures of spread for Producer A and Producer B are provided in the table below:

From the example and its data, it is now clear that although both companies have the same velocity, they definitely don’t demonstrate the same flow smoothness. Company A clearly produces its products in a smoother way than company B.

When looking at the velocity profile of both producers across the process, the above is immediately clear. 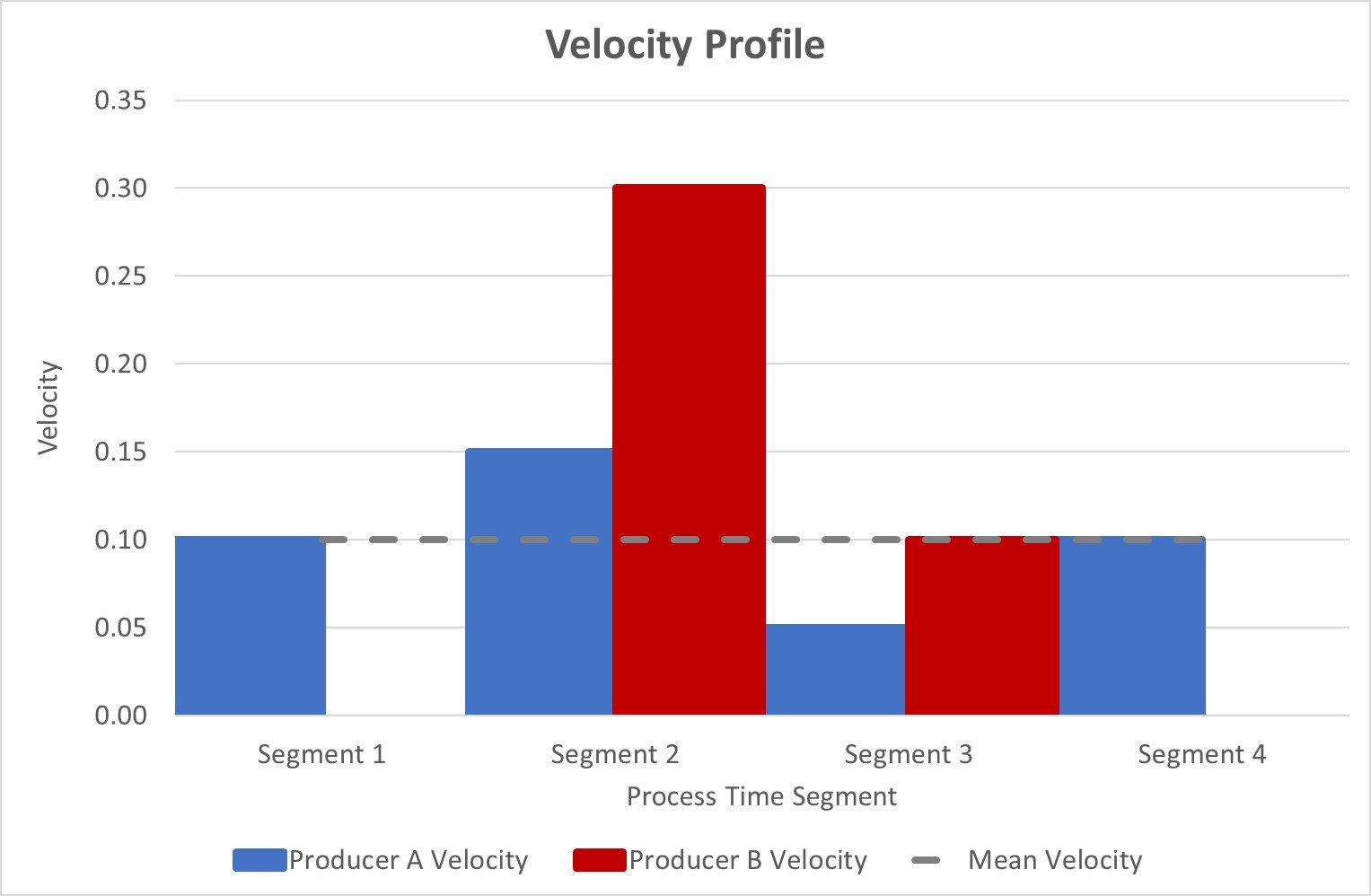 Figure: Velocity profile of both Producers in our example.

It may be clear that processes that have 100% velocity will also be perfectly smooth (when using isochronal segments). In all other cases, to improve flow, companies should increase both velocity (primarily through the reduction of throughput time as the main lever) and smoothness (by synchronizing velocity across all processing operations).

Supporting the road towards perfect flow

In this series of three posts I have tried to do a deep dive into the concept of flow. In general, improved flow will go together with lower cost, lower working capital, and better returns. Operationally speaking, improved flow will reduce safety incidents and risks, improve product quality, increase delivery reliability, increase flexibility, reduce lead time, reduce the level of inventory, increase productivity and reduce the required footprint. So, flow is something definitely worth realizing. But we should then also be able to measure our current state, define our future state and measure our progress towards perfect flow. And we should be able to evaluate the various methods around that proposedly improve flow.

I hope this series of three posts has helped in better understanding flow. And that the check items of flow velocity and flow smoothness will help you in determining where you stand, where you want and need to go, and in evaluating the methods that will help you get there.

Meanwhile, we have all been bombarded with posts and articles that are quick to expose the Just-in-Time and Lean approach to management as one of the major causes of...
Read More

What is a company, called THE JIT COMPANY, without its own proper post on the definition of JIT or Just-in-Time? Particularly in a time in which JIT is often seen as an...
Read More

Leveling: why customers and suppliers don’t buy into it

When you have been working on improving flow across the value stream, I am sure you have come across a situation where customers seem to order infrequently and...
Read More

Why ABC-analysis is inadequate for your supply chain

When asked to analyze demand, most probably turn to what is known as the ABC-analysis. ABC-analysis typically groups items in classes referred to as A, B, and C based...
Read More

There are many approaches and methods that focus on improving flow. And for good reason, as improving flow yields improved profitability and returns. But how, in fact,...
Read More

The road towards perfect flow in your supply chain (part 1)

There are many approaches and methods that focus on improving flow. Material Requirements Planning (MRP), Drum-Buffer-Rope (DBR) or Simplified-DBR (SDBR), Demand-Driven...
Read More

Kanban: the Lean alternative to MRP

Let me just cut straight to the point: MRP and APS in the end simply don't work. These approaches are based on what I call "the paradigm of the makeable reality". They...
Read More

Push and pull around the CODP — did we get it wrong?

The (customer order) decoupling point (CODP) or order penetration point is one of the most well-known logistical concepts. It indicates the inventory location in the...
Read More

Takt time. Google it, and you will be amazed at the definitions you will come across. But besides the ones that mix up takt time with cycle time, and the ones that...
Read More

How to use Every Part Every Interval (EPEI) in pull flow

End of 2014, early 2015, Christoph Roser wrote an interesting series of posts about leveling and heijunka that already triggered me at the time, as I have personally...
Read More